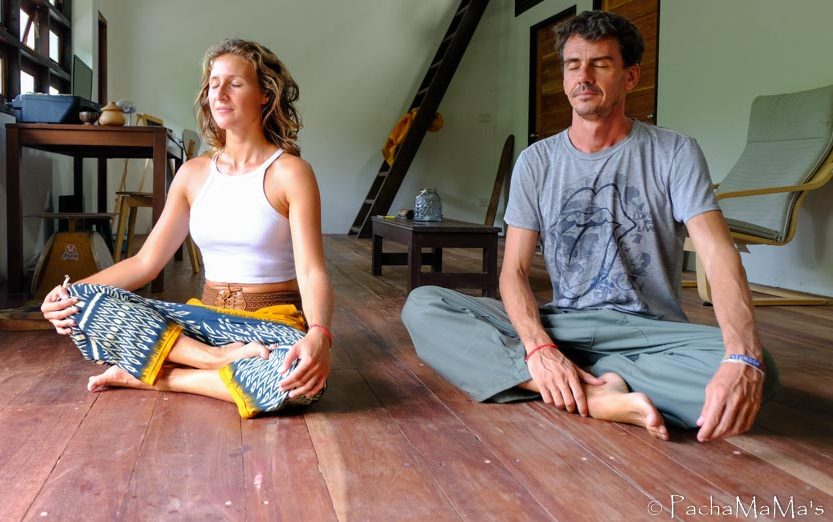 It seems to respond to a cliché, but it is the truth: the first time I picked up a book on meditation I was traveling on an Indian train towards Nepal. I don’t remember why I decided to read a book on that topic, but I devoured it in a few days.

In reality, the author did not begin by talking about meditation, but rather questioned our ways of living and seeing reality, especially in religious and spiritual matters. He explained how monotheistic religions had introduced a series of incontrovertible dogmas into the history of humanity around which our lives should have organized themselves; the society as well founded its dominance and prosperity on the ability to keep people anchored to their fears, limiting their creative ability and imposing a repetitive and habitual lifestyle in which each could express himself only within the perimeter designed by school first and then from work.

In short, we were pushed to never question anything, but to blindly believe – or with faith – to everything that we were taught by parents, teachers, priests and whoever has more. In that sharp and skeptical indictment, page after page, I found myself more and more: it was already sometime that thoughts of this kind occupied my mind – in fact my sabbatical journey was born from the need to change perspectives and intuitions – but on the pages they were so clearly and irreverently described as to make me feel good, in the right direction.

The author’s conclusions were clear: reality, as it is perceived by our mind, is a subjective experience and no one should ever let themselves be limited by someone else’s teachings, however important they are or how referenced the person is to impart them: each had to go in search of the truth on his own.

Well said, I thought, especially because the author puted himself into the category of those who, despite having a message to deliver, should not be taken for granted; everyone, including him, had to be subjected to the final scrutiny of whom was decided to investigate on his own. The book ended suggesting meditation as a personal path to penetrate one’s reality with more depth and precision; He also challenged readers to ask themselves a simple question with conviction: who am I?

Since that day, I have read several books on the subject, some more theoretical, others with a more practical cut, some written by Indian holy men, others by Western authors. All suggest the same thing: the message is more important than the messenger and no one should receive it as if it were a revealed truth, but rather experience any statement, intuition or technique provided during the journey.

A very different approach compared to the endless hours of catechism, religion, and, more generally, school education, where instead everything was presented for real: therefore to be memorized, absorbed and venerated. I do not question the faith or dedication with which some people approach certain religious or social doctrines, but as far as I am concerned, the books on which I studied as a boy and, later also as an adult, had often given me a lack of vitality, curiosity and fluidity.

Suddenly, instead, I had discovered a dynamic and innovative literature, in which reality was taken into consideration from very different perspectives and with an always experimental edge: surely something to which I felt very close by intuition and aspirations.

It has not always been easy to find your way around: the nature of the topic is complex, not so much because practicing meditation is inherently difficult, but because it is difficult to understand who has real competence and who instead made spirituality his battlefield for emerge in life, create adepts or even just pretend to be wiser than he really is.

If you decide the time has come to learn how to play tennis, booking a lesson with a teacher is the most obvious thing: in this case, however, in the first ten minutes of lesson you will be able to understand if your instructor is able to take a racket in his hand, or not. In the second case, it will be the last time you will see it.

If you want to learn to meditate, it is not always easy to find a person who can help us and, above all, it is very difficult to distinguish a charlatan from an expert: sorry, even the latter will not be able to levitate at your command and, therefore , it will not be easy to evaluate his abilities or goals achieved.

The second difficulty, as far as I’m concerned, lies in the meditation technique itself; many of these are intrinsically linked to the culture and traditions from which they were born and, therefore, before being able to proceed in practice it is necessary to share and digest rituals or theories far from our mentality: this is definitely my limit, but when I am asked to chant mantra in an incomprehensible language or to accept the fact that our body is equipped with invisible energy channels, my mind begins to reject the experience, not because the possibility of immersing oneself in other cultures lacks of interest (I do it whenever I can), but because meditation, for me, has to be a simple and immediate tool to understand and to be able to relate to without too many filters.

However, if your intuitions will lead you to practice a particular meditation that requires you to move to Tibet, shave your head and start eating only soups, I will certainly not be pointing my finger at you by questioning your choices.

In the end, meditation, like all activities that require total attention to one’s own being, has as its ultimate goal to teach us the understanding of ourselves in such a way as to develop an intimate and strong connection with the external world: the way to get there it is secondary, or rather, everyone can find his own.

If everyone could directly experience this, or manage to feel at one with their surroundings, do you really believe there would still be someone who would feel the urge to harm other people or the environment in which they live?

Buddhists, for example, believe that our neuroses, our selfishness, our fears are the result of a constant feeling of isolation that we feel towards the outside world. In their literature, to describe this process of isolation, they resort to the metaphor of a monkey closed in a house with only five windows through which to look outside; the five windows represent the five senses. This monkey, used to wandering free through the forest, jumping from one branch to another, warming himself in the sun and enjoying nature and its fruits, suddenly finds himself surrounded by solid walls and no longer remembers the condition of happiness, openness and fluidity where it was previously.

It then begins to create its own solidified reality, codifying in impulses all perceptions coming from the five windows. When a perception is positive, mentally it will attribute to it a positive label, when it is negative, a negative label, when it is neutral, a neutral one. Thus it will develop an indefinite quantity of labels, on which his mind builds on thoughts and, finally, emotions: those that we live every day, recognizing them an absolute role in our lives.

Living a life that is not filtered by one’s mind is against nature, but the downside is dangerous: what would we have left if the thoughts and emotions we experience every day derive from a distorted perception of reality and we find ourselves, without realizing it, like that poor monkey, inside a house with solid walls and without the possibility of going out and living a free and original life?

In the months when I practiced meditation more intensely I found myself realizing this uncomfortable truth: our sensations and perceptions are not always as calibrated and refined as we believe. Not because we lack the skills, but because we have never been encouraged, educated to look within ourselves, to the extent that we have often looked outside. I don’t remember an hour of class at school in which our intellectual abilities have been put in the background, to better listen to our intuitions or the ability to observe our inner context to understand it and, therefore, transcend it.

Over the course of our lives, each of us has been tested several times, obtaining from certain experiences some intuitions or answers regarding one’s inclinations, limits or aspirations. But we have been raised and shaped in a society where understanding oneself is much less important than advancing, studying, competing, imposing oneself, having fun. In particular, we have developed infinite forms of distraction from ourselves: education, books, sports, technology, work and the list can go on and on.

Meditation represents a physical and temporal space in which to confront moods, thoughts, emotions, bodily sensations, learning to recognize and observe them. I don’t think there is ever an end to self-knowledge, but the trip, even if one way, is worth the ticket. This is why when, ten years ago, I met Vipassana meditation along the path, I felt after a while that I had a simple method in my hands, free from any doctrinal bows to investigate my nature. The community where I was welcomed to learn it gave me food and accommodation during the ten days of meditation without asking me for anything in return. It was my choice to make a donation to the association once I returned home to thank them for the experience and time dedicated to me and for the same reason I would recommend it to anyone interested. The practice of this meditation technique is now known in the West with the name of mindfulness and has had an exceptional diffusion thanks to its practical, almost scientific nature.

From that experience I understood how much my inner context had always been put in the background compared to the external stimuli to which I subjected myself or I was subjected daily. Never before had I had the opportunity to reflect and experience myself through such a magnifying glass. In the years in which I have practiced meditation I have never felt the need to reach any conclusion along the way, but I have never had the feeling of having lost time dedicated to meditating: I cannot always say the same for other activities.

We all play the same game, the rules of the game are fixed and immutable: we occupy a physical space for a certain period of time and, as we move within this complex reality, our energies should be projected into increasing our well-being and that of the people around us; I don’t think there is a better definition of progress. Anyone with the power to do will choose to wake up every morning filling his personal experience with only pleasant mental states; on the contrary we are often held hostage by our minds and the barrier between us and a full and happy existence often seems to be represented by a fog of repetitive, petty thoughts. The understanding of our mind as a whole I think should represent the next goal of our species, otherwise technology, welfare and scientific discoveries will not be enough to guarantee everyone a life lived to its fullest potential.

London street art - we are in Brick Lane, one of t

Animal behavior is an increasing field of discover

Sometimes nature is stronger than our imagination,

Sometimes the only right thing to do is JUMP! #sun