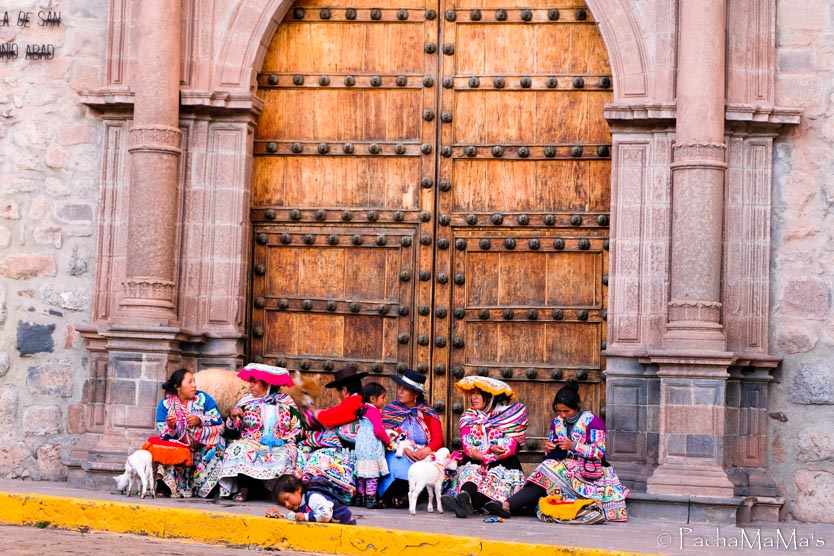 The first look at Cusco is not the most positive; we arrive there, however, from a bus trip lasting the beauty of twenty-four hours among the Peruvian Andes. I assure you, hard work and our stomach knows something about it. That is why, that afternoon, while we are gliding in the usual South American bus station, crowded with thousands of beggars and travelers, my enthusiasm for the city is not sky-high.

Well, what can I say, wrong impression: after a few days since we arrived in the city, I immediately noticed the uniqueness of Cusco. The Incas had called it Qosqo, or navel, center (of the world). Surrounded by emerald green mountains, resting on an Andean plateau, the city skirts the sky and recalls all the attention of the region. At night, its lights flare up through the center and then up into the facing mountains, creating an incendiary effect.

Streets and alleys are full of people, always: when evening falls, the cold cuts the streets and the mountain wind takes possession of its neighborhoods: the historic center is depopulated and all life is transferred to the working-class districts.

How many cultures share this city, how many different souls are wandering among its closed markets and open squares: during the day the Andean community populates the historic center and adjacent neighborhoods: we can hear them chewing Quechua (local dialect) and coca leaves on street corners with their faces cooked in the sun, the shifty eyes and, as for the women, always wrapped in rainbow-colored drapes: they bargain, sell, doze, laugh and then, when evening arrives, they disappear into the mountains. They are a simple, industrious people, tied to their traditions and nature, respectful and prankster; they do not love modernity, but they accept it and their eyes turn to the mountains rather than to men.

Then there are the inhabitants of Cusco: many have Creole descent, they own shops, restaurants, hostels, tourist agencies, they work in the immense local markets and public administrations. They constitute the social base and the economic soul of the city: they are kind, shy and proud of their city.

Finally, all those Europeans or Americans who came to Cusco with different intentions: they decided to stop here, fascinated by a simple lifestyle, economic but rich in choices and possibilities, with a mystical and welcoming atmosphere; they became part of a community in the community, where they probably felt more accepted than the countries and their communities of origin.

Walking through the streets of the city our eyes are attracted by a thousand of life situations and details: the color of the fabrics, the enormous quantity of foods exhibited, proposed, shouted; smells emanate from every restaurant, bar, banquet, street corner and exotic and less exotic fruits of every shape and color embellish the surroundings.

The shops are full of knick-knacks without a specific order, while picturesque characters tread the streets, each with its intent unknown to us; in the markets everything is sold, from meat to fish, from dried fruit to caramelized ones, from real flowers to fabric ones and then health concoctions, alpaca fetuses used to perform ceremonial offerings to mother earth, plants with hallucinogenic properties, holy pictures and amulets.

Crafts of the past still have their dignity and usefulness: tailors, shoemakers, artisans, shoe-shiners are everywhere, in their crumbling shops or on the street, working incessantly. To this noisy and dynamic bustle thousands of tourists are added from all over the world: they walk, take photographs, are often the subject of small scams: those who pay more than they should, those who are attracted by the proposals of “traditional Incas massages”, who mistakes industrial products for handicrafts; the list is long and is common to many places in the world that are the object of mass tourism. Each community has the responsibility and intelligence to understand when to stop and start again with new proposals and tourism ideas for the long term and not just for a small immediate gain.

Our time in Cusco is about to end; in a few days we will move towards the Amazonia and Bolivia. During our stay in the city we met interesting, welcoming people, each of whom left us a piece of their life. In the eyes of each I find that sense of freedom and passion for life, whose presence builds strong communities, lively and dynamic cities, pride of their nation. Que viva Peru!

London street art - we are in Brick Lane, one of t

This website uses cookies to improve your experience while you navigate through the website. Out of these, the cookies that are categorized as necessary are stored on your browser as they are essential for the working of basic functionalities of the website. We also use third-party cookies that help us analyze and understand how you use this website. These cookies will be stored in your browser only with your consent. You also have the option to opt-out of these cookies. But opting out of some of these cookies may affect your browsing experience.
Necessary Always Enabled
Necessary cookies are absolutely essential for the website to function properly. This category only includes cookies that ensures basic functionalities and security features of the website. These cookies do not store any personal information.
Non-necessary
Any cookies that may not be particularly necessary for the website to function and is used specifically to collect user personal data via analytics, ads, other embedded contents are termed as non-necessary cookies. It is mandatory to procure user consent prior to running these cookies on your website.
SAVE & ACCEPT